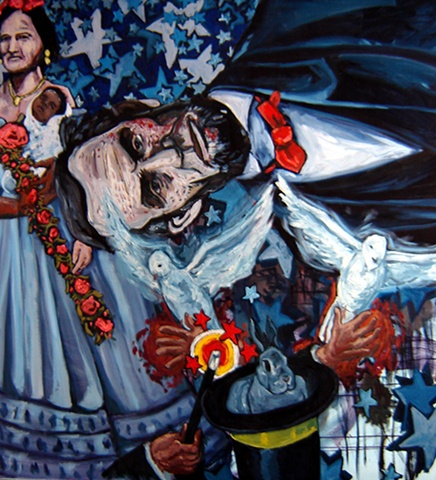 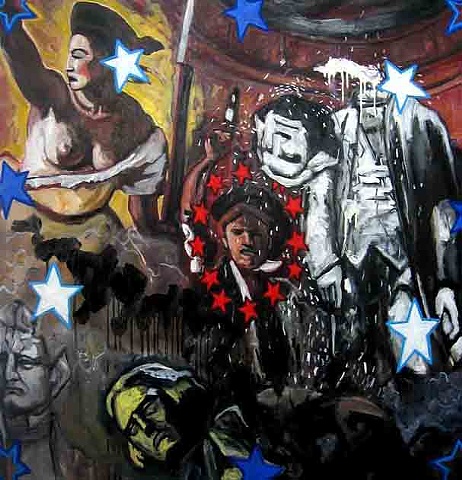 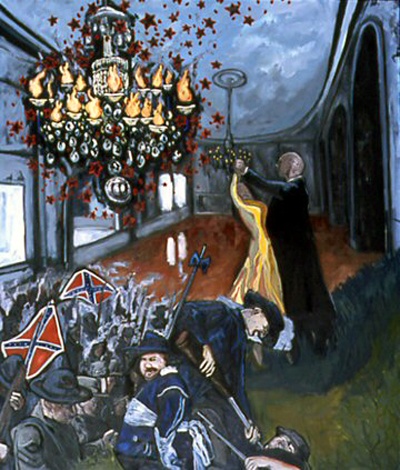 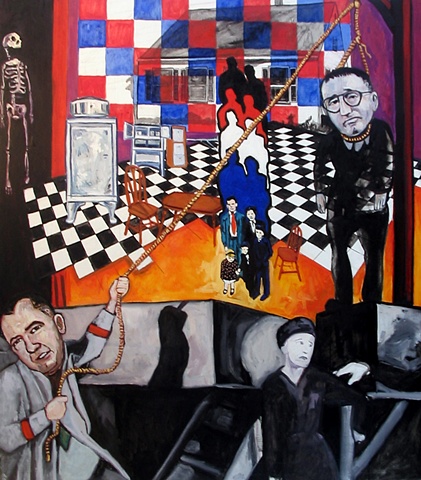 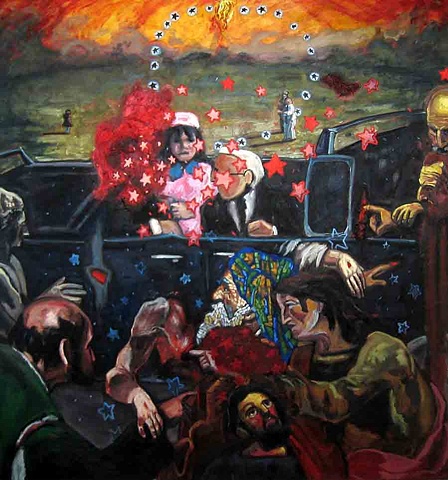 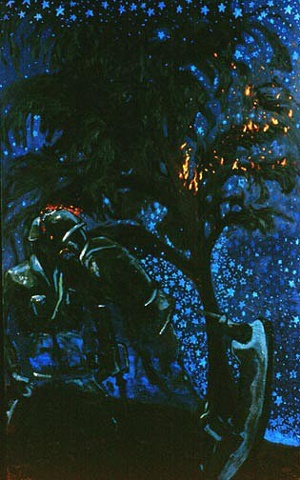 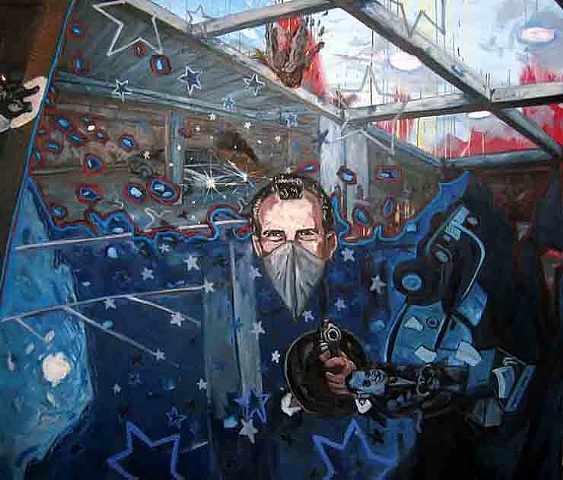 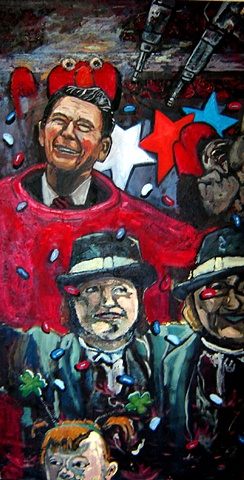 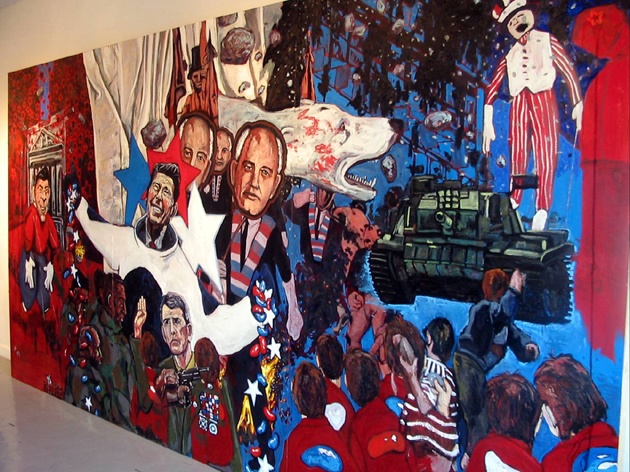 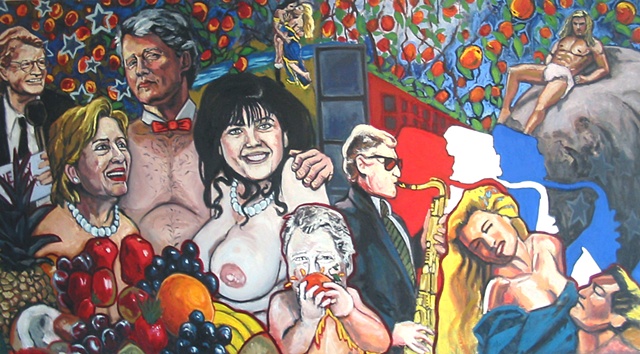 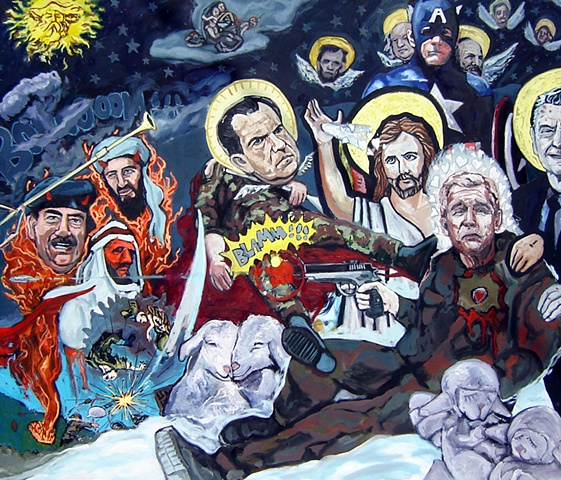 This body of work explored the history of the United States through metaphorical representations of past American presidents. It stemmed from my disappointment and anger about the Iraq war and the lies surrounding the war. I painted one painting per American President (several are not shown because they were destroyed in a studio flood in 2006).

Information regarding the past and the present are suspect as are my own interpretation as a Liberal, Canadian artist. The very nature of my exploration questions the usefulness of history as well as the role of the outside observer in the re-creation of this history. While the surface of my work is rooted in the past through the use of the historical iconography, the meanings very much relate to the present. Questions arise about such broad subjects as politics, marginalization, religion, war, scientific progress, the Canadian relationship with the United States and the dichotomy between the American Dream and American history.

One of the reasons that I’ve referenced American History is to mark the disparity between the ideals of the American Dream and the opposing, often brutal, reality.

America’s habit of making heroes out of their political figures does a disservice to history. In “Dare to Doubt”, I question the legacy of America’s Camelot, John F. Kennedy. Two apes, used here as a symbol of both man and nature, scream at a flame shooting in the sky. The flame might reference the space race (the glory of the times) or the Cuban missile crisis (a shameful moment in American History). I appropriate Carravagio’s Doubting Thomas, reaching across the gap between the paintings and poking into the wound of Jesus.

The way in which flawed, flesh and blood Presidents are transformed into iconic ideals is also explored in these paintings. A case where the legend may not fit with the reality is with Abraham Lincoln. While Lincoln was responsible for the Emancipation Proclamation that eventually freed the slaves, history books often neglect to mention this was a war act and only the slaves in the rebelling states were freed, therefore weakening the confederate armies. In “The disappearing act of Abraham Lincoln” this “sleight of hand” is represented by the magician’s hands and the magic tricks. In the background stands his wife, Mary Todd Lincoln, holding an African-American baby. This baby represents the numerous illegitimate children Lincoln was reputed to have with his slaves and, more significantly, the obfuscation of history. A painting and photography’s ability to alter the meaning of history is also questioned. Abraham Lincoln was the first President to be photographed. The juxtaposition between the heroic paintings of the idealized Lincoln and the photograph of the emaciated, pock-marked Lincoln is startling. I relished the opportunity to use the act of painting to embellish these flaws rather than erase them.

Current political discourse is seen throughout all of the work and it becomes apparent that this discourse deals with subjects that were always relevant but which have been amplified in recent years. This discourse includes subjects such as the role of religion, political racism, the depersonalization of war and the United States’ relationships with questionable allies.

The current war in Iraq, the current U.S. administration and a current sense of anxiety influence these paintings. In “Lyndon Johnson”, two toy soldiers’ faces melt together as a tree burns in the background. The inquiring of the usefulness of war by the American people during the Vietnam era is unquestionably the seed for many of my generation’s anti war activism. The similarities between the climate of the Vietnam War and the current Iraq War is startling and depressing. The iconic tree, often a metaphor for God or nature, is representative of the very nature of humanity. Is war and destruction part of our nature? Is it undeniable?

A dark satirical edge presents itself in much of the work. For example, in “The Rapture (George W. Bush Ascends to Heaven)”, I paint what I envision as the troublesome reality of the current U.S. President’s brain. Being a fundamentalist Christian, President Bush believes in the apocalypse and that one day Heaven and Hell will hold their war and people will be divided into “sinners (evildoers, non-Americans)” and “saints (himself, Reagan , Captain America)”.

My artwork does not attempt to offer answers. Instead, it is evidence of my continuing questioning. Many motifs continue through the work, linking each piece thematically. Each painting informs the next, creating a critique of American political history.